In late 2011 there was a rumbling in the air around the open education space… Massive, open, online courses were springing up all over the web. Two distinct types begin to emerge out of the MOOC model - Connectivist MOOCS (or cMOOCS) and Instructivist (or xMOOCS). Both were large-scale online learning experiments, with very different theories of learning behind them. In the open educational field, practitioners, activists and communities of interest were beginning to think about the component parts of cMOOCS and how they might work together, rather than adding to the emerging model of a proliferation of MOOC platforms, many of which seemed to be recreating the same thing repeatedly.

At P2PU, we’d been talking to our collaborators at MIT OpenCourseWare and had been struggling with the problem of how to move learners in a cohort through the exciting new world of the MOOC. “I’d read a blog about using RSS feeds, as a kind of time-release capsule for OER material, which would send learners a reminder, and thought it was a really interesting idea, but I knew that RSS was a bit too esoteric for many students, and it didn’t solve the cohort problem,” says Steve Carson, Head of External Relations at MIT OpenCourseWare.

The solution, we soon realised, would look a little bit like a mailing list sign-up, without a platform per se, which would allow organisers to loop in the various component parts and run what is essentially a headless MOOC; no instructor was placed at the centre, and after a certain number of signups was reached, the MOOC itself would trigger messages to everyone in the group.

Serendipitously, we were able to tap into the community of Python learners on Open Study, one of our project partners. This well-established network of co-learners (about 17 thousand of them) meant that we were able to set up the community in a way that allowed us to ask questions to the wider group – so if any users had questions, they could refer them to a community that was much larger than the course itself. And all of those people, many of whom had lots of experience, were willing to answer questions.

Steve experimented with this community during the testing phase, “I tried it myself. The first task was to build a rock, paper, scissors game, and I posted the code to OpenStudy and asked people there to take a look at it, before course had started. Someone did, and they answered my questions, gave me feedback, and showed me how I could have done the same thing better and faster with about 15 fewer lines of code.” By posting the answers, and getting people to discuss the posts, we realised that the optimum situation is to be able to plug into an online community which is larger than the course itself. The community become the subject experts. 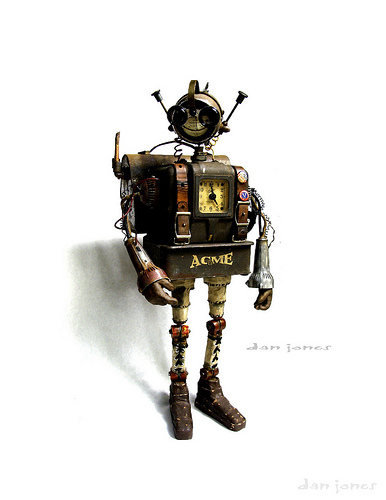 While a method of communication is a good start, no course can run without something to learn from, and place in which to do the learning.

The lightweight model we were developing didn’t allow for recruiting or focussing on subject-experts, so we decided to structure the course by dividing our content into a series of sequenced modules and arranging it in order. This made for distinct blocks of content, easy enough for learners to work through in a group, in any order, without needing step-by-step guidance. We tested this by creating a test cohort, which worked through the materials pre-launch . Early results were not encouraging - everyone dropped out by week 6!

This turned out to be a blessing in disguise - high dropout rates in online courses are an accepted part of the landscape - but many people who drop out of courses often plan to come back to the materials when they have more time. However, not many of the set-ups being tested allowed for looping back in. Our test cohort’s experience showed us that it would be important to create a space where materials and the messages from the MOOC could be stored and accessed by users. We did this using a Wordpress blog to store the weekly emails. This site became one of the most-used resources for the course, and has enabled people to drop back in as and when they want to. 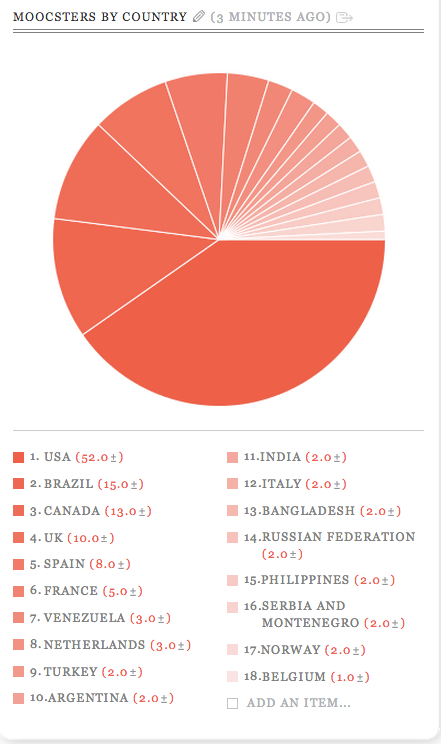 A Python course made the most sense as a pilot because we found ourselves at a convergence point of materials, ommunity and platform. P2PU’s active community of webmaker learners, coupled with the community available, and the volume of OER materials made a lot of sense. We were looking to test a concept, rather than make a particular impact with the subject, but in theory any subject which suits automated assessment would have worked. Allen Downey, Jeffrey Elkner and Chris Meyers’ How Think Like a Computer Scientist: Think Python is an open textbook which has been used for several years for anyone wanting to learn Python programming. This, in combination with the materials from MIT’s Gentle Introduction to Python course, covered the content component of the MOOC. 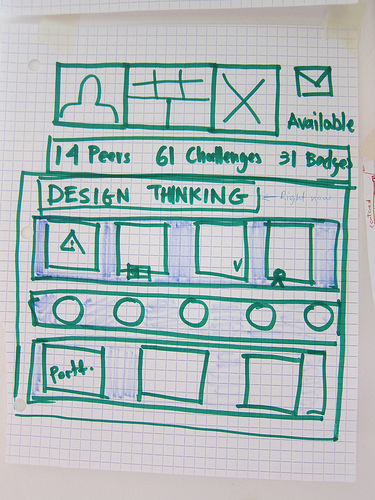 Give It A Voice

Computer Science textbooks aren’t always the most exciting learning materials in the world. But research shows that people learn better when they’re having a good experience. After some discussions, we decided that it would be good to create a character who would deliver the messages - a kind of steampunk International MOOC of Mystery. The irony was intentional - we wanted people to understand that a machine was talking to them, as if other MOOCs weren’t machines! It also allowed those who were writing the text to have a bit of fun, with an anchor for for presenting content that, if you’re not careful, can come across like different shades of eggshell paint. 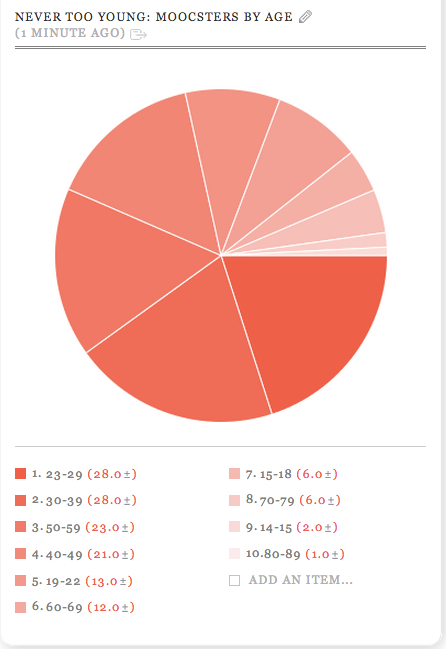 The objective, when we built the Python MOOC, was not to recreate the huge scale of other MOOCs. At least, not at first. But as we worked on it, and realised that the model was both lightweight and resilient enough to handle larger numbers, we began to set our sights higher. A few hundred people was no longer enough - we decided to spread the word, and thanks to our partners, we found ourselves with over 5000 people signing up after the launch. Four more iterations of the MOOC have been run since then, and each time, we have been able to adjust the grouping, tweak messaging and rethink content management, in order to experiment with different ways of learning, and optimise the experience for all the participants, no matter what the size of the group is. 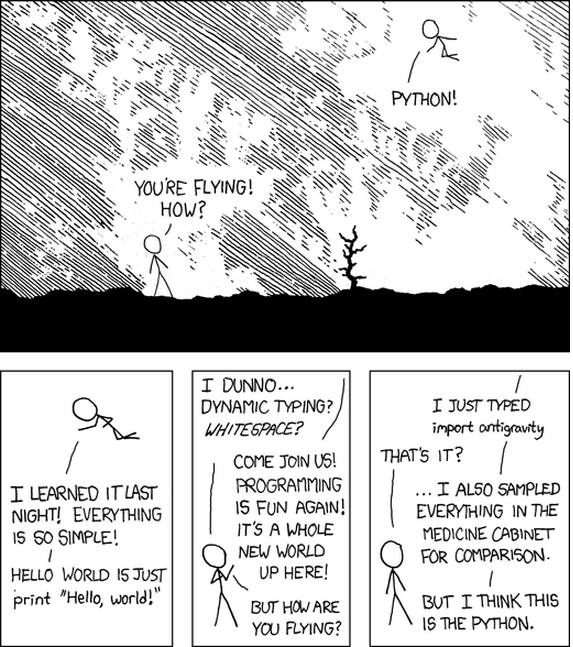 The overall sense with the Python MOOC was that the interest in it proved the concept. It is possible to build a MOOC for very little money: At a total cost of roughly U$4000 dollars and some developer time, we were able to build a MOOC for nowhere near the quarter of a million dollars that some institutions are investing in MOOCs. A Gentle Intro To Python has shown that in terms of providing people with a robust learning experience at scale, it can be done for next to nothing. Secondly, it is possible to build a MOOC without having to invest time or money into complex platform development. Using different tools which can be bolted on for the community, assessment content components gave us the opportunity to try different forums, abandon those that weren’t working and try new ones. One of the issues in MOOC research at the moment is the over investment in content development, however, our experiment has shown that by putting a relatively small amount of energy and effort into the assessment and community components, we were able to run an effective MOOC. And it was so damn much fun. Often in higher education you have to be a little bit buttoned up, but with this, we were able to do the best we could, set expectations, and experiment, and invite others to do this with us.

Since launching A Gentle Intro to Python, we have run 4 more iterations of the course. We have also improved and tweaked the platformless model and used it to run learning experiences on data wrangling with our partners at The Open Knowledge Foundation, and Learning Creative learning with the Lifelong Kindergarten research group at the MIT Media Lab. Researchers from the University of Maryland have begun to crunch some of the data generated by the MOOC in order to lift the lid on the learning that’s going on. We’ve also working on new ways to improve the MOOC experience by adding more interactive tools - the class photo feature lets users see their peers, and we’re working on adding’ like hangouts and video to the model. Stay tuned. Keep On MOOCin’ The International MOOC of Mystery.